Posting off the last letter about the Black and White Party I was struck by the increasing disparity between rich and poor, and the damage done when politicians sidestep and fail to honour promises to the electorate. Wouldn't it be marvellous if we could change that, even a little? I'm convinced that by getting involved, we can. Letter 13 is my response to that as well as George's requests for members of the public to get in touch with ideas regarding cuts and kick-starting economic growth : 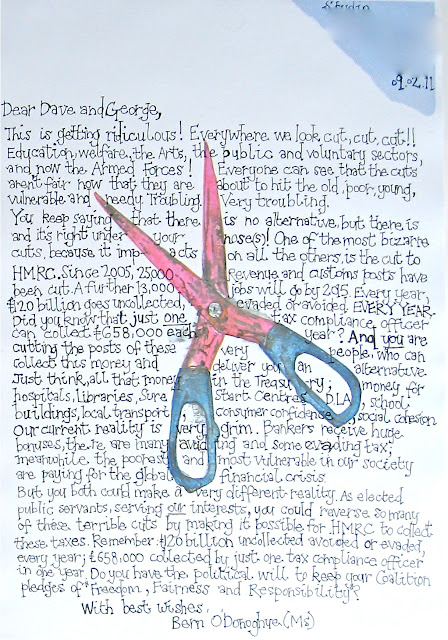 You might want to check out the excellent PCS website. Mindful of the social as well as the financial deficit, their video newsletter sets out a credible and preferable alternative to the cuts that local councils will be forced to implement through Dave's ideological plan to shrink the public sector. I think it's important that we all keep pointing out alternatives to the Conservative led Coalition; at least then they can see we're trying to work with them. Also, if Dave's going to turn, better that he's going in the right direction. With that in mind I'll be attending the March for the Alternative in London next month and it'd be lovely see you there.