Letter 82: Nick Clegg and his mansion tax - "Man for All Seasons" or just Conference season? 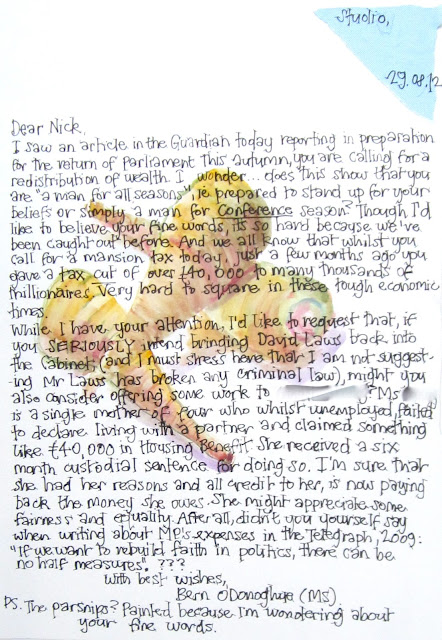 "Dear Nick,
I saw an article in the Guardian today reporting in preparation for the return to Parliament this autumn, you are calling for the redistribution of wealth. I wonder...does this show that you are"a man for all seasons" ie: prepared to stand up for your beliefs, or really just a man for Conference season? Though I'd like to believe your fine words, it's so hard because we've been caught out before. And we all know that whilst you call for a "mansion tax" today, just a few months ago you gave a tax cut of over £40,000 to many thousands of millionaires. Very hard to square in these tough economic times.

While I have your attention, I'd like to also request that if you SERIOUSLY intend bringing David Laws back into the Cabinet (and might I stress here that I am not suggesting Mr Laws has broken any criminal law) might you also consider offering some work to ***** I*****? Ms I***** (name withheld) is a single mother of four, who whilst unemployed failed to declare living with a partner and claimed something like £40,000 in Housing Benefit. She received 6 months imprisonment for doing so. I'm sure she had her reasons and all credit to her, is now paying back the money she owes. She might appreciate some fairness and equality. After all, didn't you yourself say when writing about MP's expenses in The Telegraph, 2009: "If we want to rebuild faith in politics, there can be no half measures."

PS The parsnips? Painted because I'm wondering about your fine words." 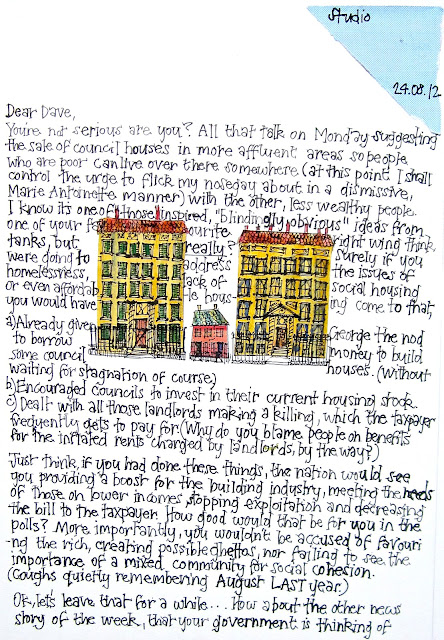 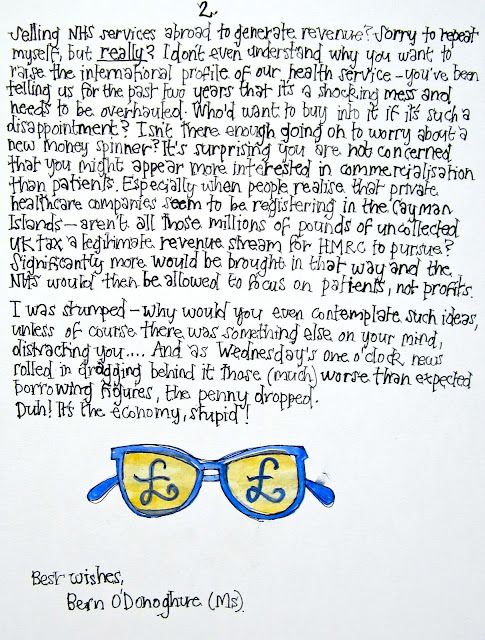 "Dear Dave,
You're not serious are you? All that talk on Monday suggesting the sale of council houses in more affluent areas so people who are poor can live over there somewhere (at this point I shall control the urge to flick my nosegay about in a dismissive, Marie Antoinette manner) with the other, less wealthy people. I know it's one of those inspired, "blindingly obvious" ideas from one of your favourite right wing think tanks, but really? Surely if you were going to address the issues of homelessness, lack of social housing or even affordable housing come to that you would have:
a) Already given George the nod to borrow money to build some council houses. (Without waiting for stagnation, of course).
b) Encouraged councils to invest in their current housing stock.
c) Dealt with all those landlords making a killing, which the taxpayer frequently gets to pay for. (Why do you blame people on benefits for the inflated rents charged by landlords, by the way?)

Just think, if you had done these things, the nation would see you providing a boost for the building industry, meeting the needs of those on lower incomes, stopping exploitation and decreasing the bill to the taxpayer. How good would that be for you in the polls? More importantly, you wouldn't be accused of favouring the rich, creating possible ghettos, nor failing to see the importance of a mixed community for social cohesion.
(Coughs quietly, remembering August LAST year).

Ok, lets leave that for a while... How about the other news story of the week, that your government is thinking of selling NHS services abroad to generate revenue? Sorry to repeat myself, but really? I don't even understand why you want to raise the international profile of our health service - you've been telling us for the past two years that it's a shocking mess and need to be overhauled. Who'd want to buy into it if it's such a disappointment? Isn't there enough going on to worry about a new money spinner? It's surprising you are not concerned that you might appear more interested in commercialisation than patients. Especially when people realise that private healthcare companies seem to be registering in the Cayman Islands - aren't all those millions of pounds of uncollected UK tax a legitimate revenue stream for HMRC to pursue? Significantly more would be brought in that way and the NHS would then be allowed to focus on patients, not profits. I was stumped - why would you even contemplate such ideas, unless of course there was something else on your mind, distracting you... And as Wednesday's one o' clock news rolled in dragging behind it those (much) worse than expected borrowing figures, the penny dropped.
Duh! It's the economy, stupid!

Posted by Bern O'Donoghue at 12:37 No comments:

Letter 80: An Economy without a pulse and life-threatening cuts to ambulance cover 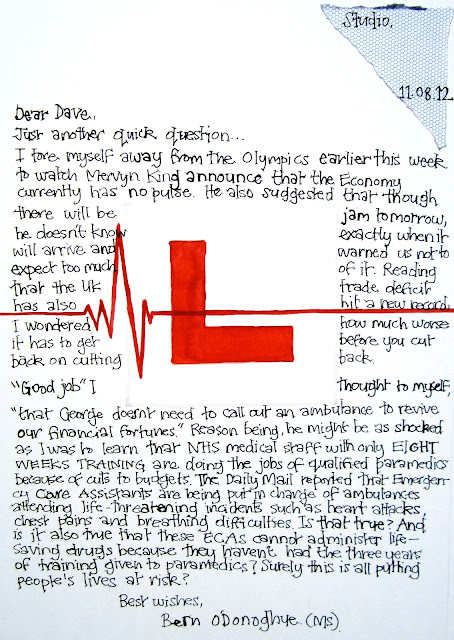 "Dear Dave,
Just another quick question...
I tore myself away from the Olympics earlier this week to watch Mervyn King announce that the Economy currently has no pulse. He also suggested that though there will be jam tomorrow, he doesn't know when exactly it will arrive and warned us not to expect too much of it. Reading that the UK trade deficit had hit a new record, I wondered how much worse it has to get before you cut back on cutting back.
"Good job" I thought to myself, "that George doesn't need to call out an ambulance to revive our financial fortunes. Reason being, he might be as shocked as I was to learn that NHS medical staff with only EIGHT WEEKS TRAINING are doing the jobs of qualified paramedics because of cuts to budgets. The Daily Mail reported that Emergency Care Assistants are being put in charge of ambulances attending life-threatening incidents such as heart attacks, chest pains and breathing difficulties. Is that true? And is it also true that these ECAs cannot administer life-saving drugs because they haven't had the three years of training given to paramedics? Surely this is all putting people's lives at risk?
Best wishes, etc"

Posted by Bern O'Donoghue at 12:32 No comments: 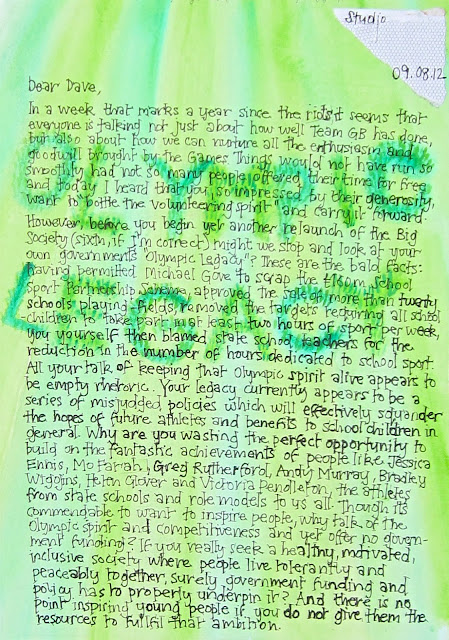 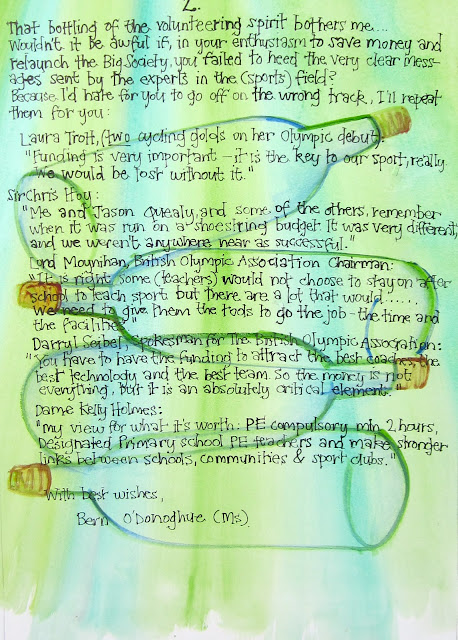 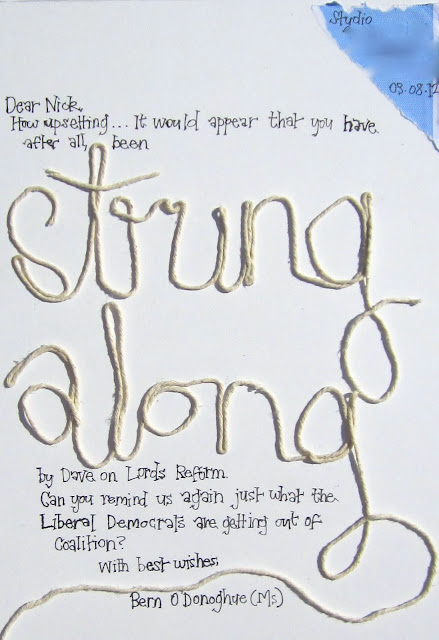 "Dear Nick
How upsetting... It would appear that you have after all, been
strung along
by Dave on Lords Reform.
Can you remind us again just what the Liberal Democrats are getting out of Coalition?
With best wishes, etc"

Posted by Bern O'Donoghue at 17:13 No comments: 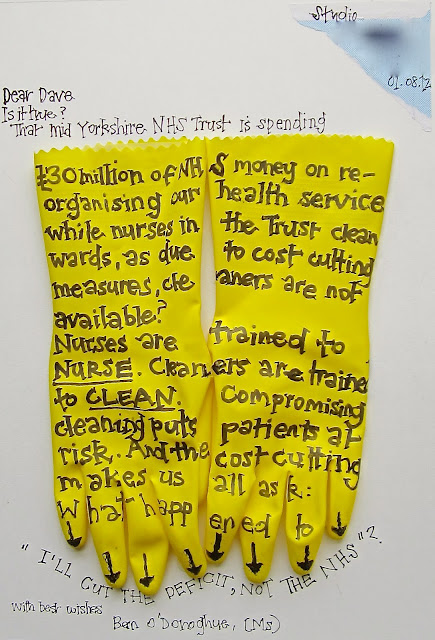 "Dear Dave,
Is it true?
That Mid Yorkshire NHS Trust is spending £30 million of NHS money on reorganising our health service while nurses in the Trust clean wards, as due to cost cutting measures, cleaners are not available?
Nurses are trained to NURSE. Cleaners are trained to CLEAN. Compromising cleaning puts patients at risk. And cost cutting makes us all ask: What happened to "I'LL CUT THE DEFICIT, NOT THE NHS"?
With best wishes, etc"