Letter No 10: The magic of woods and forests

I've just been walking to the studio and the sun came out; very welcome at the tail end of January. I have to trick myself through the first couple of months of the year, making sure to do things that will counteract the urge to stay under the duvet and sleep. Because I find winter such hard work, I buy daffodils ridiculously early, try to surround myself with bright colours and all the while count down the weeks to spring. When I can, I'll go to the woods and look for signs of new growth. That damp earthy smell, the sound of the twigs snapping, leaves rustling underfoot and all those echoey sounds reconnect me with my senses and as I spot the odd shoot or snowdrop, my mood lifts significantly. When spring does arrive, I drag the kids to see the bluebells and every time I am blown away at how beautiful it is (telling the kids there's a lash in my eye doesn't stop them laughing at me). Come autumn and we're back to see the colour, find seed heads and then there's that gorgeous loamy smell again. 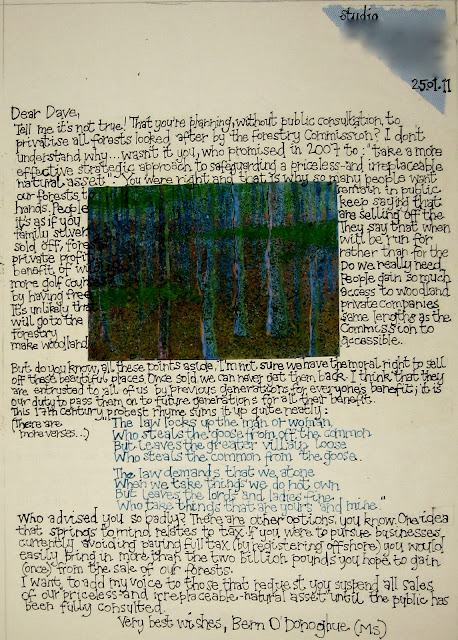 If I were religious, I'd visit a church to feel as I do when walking in a wood and that's why I want them to stay in public ownership. For me and everyone else who connects with something bigger than themselves, woods and forests are magical places. We owe it to ourselves and future generations to get behind any campaign that keeps these lovely spaces owned by the public, for public use.

P.S Here's that 17th century rhyme in full, which was a protest against English enclosure:

The law demands that we atone
When we take things we do not own
But leaves the lords and ladies fine
Who take things that are yours and mine.

The poor and wretched don't escape
If they conspire the law to break;
This must be so but they endure
Those who conspire to make the law.

The law locks up the man or woman
Who steals the goose from off the common
And geese will still a common lack
Till they go and steal it back.
Posted by Bern O'Donoghue at 15:10 2 comments:

Now don't get excited, but someone in Dave's office has dropped me a line...

Just as I was wondering when Dave and Nick were going to get in touch, the postman delivered this: 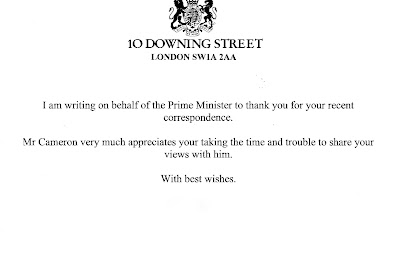 And whilst it is nice that the letters have been acknowledged, I was hoping for more; so in reply, I sent the following last week: 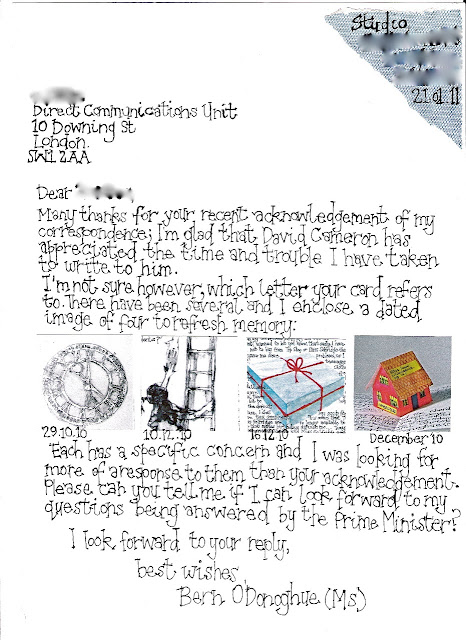 And round about the same time, this turned up: 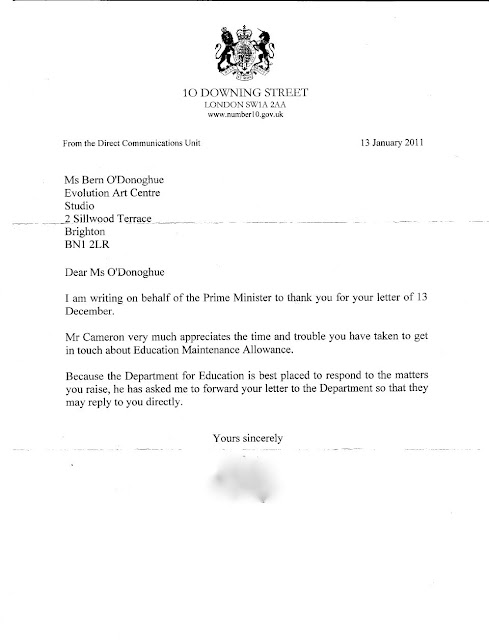 Letter No 9: Worries in a crossword 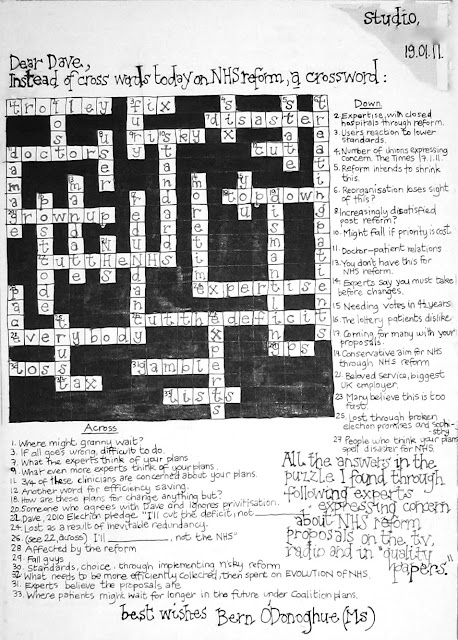 Apologies to anyone who finds No 8 a hard read, but I suggest you blame that on Dave and Andrew. When I began to map the letter out, it became obvious that the NHS overhaul is worrying in too many ways for ANYONE to deal with in one go. Sheer limitation of space meant I stopped at thirty three points and it's difficult to read. So for anyone wishing to understand the crossword have a look below...

Clues Down
2. Expertise, with closed hospitals through reform: lost
3. Users reaction to lower standards: fury
4. Number of unions expressing concern, Letters page 'The Times' 17 January 2010: six
5. Reform intends to shrink this: state
6. Re-organisation loses sight of this? treating patients
8. Increasingly dissatisfied post reform? users
10. Might fall if priority is cost: standards
11. Doctor - patient relations: damage
13. You don't have this for NHS reform: mandate
14. Experts say you must take before changes: more time
15. Needing votes in four and a half years: you
16. The lottery patients dislike: postcode
17. Coming for many with your proposals: redundancy
19. Conservative aim for NHS through reform: dismantling (video as well as article)
21. Beloved service, biggest Uk employer: NHS
23. Many believe this is too fast: pace
25. Lost through broken election promises and sophistry: trust
27. People who think your plans spell disaster for the NHS: experts

Clues Across
1. Where might granny wait? trolley
3. If all goes wrong, difficult to do: fix
7. What the experts think of your plans: disaster
9. What even more experts think of your plans: risky
11. 3/4 of these clinicians are concerned about your plans: doctors
12. Another word for efficiency saving: cut
18. How are these plans anything but? topdown
20. Some one who agrees with Dave and ignores privatisation: grown up
22. Dave, 2010 Election pledge "I'll cut the deficit, not                     " cut the NHS
24. Lost as a result of inevitable redundancy: expertise
26 (See 22 across) "I'll                          , not the NHS": cut the deficit
28. Affected by the reform: everybody
29. Fall guys: GPs
30. Standards, choice through implementing risky reform: loss
31. Experts believe the proposals are: gamble
32. What needs to be more efficiently collected then spent on EVOLUTION of NHS: tax
33. Where patients might wait for longer under Coalition plans: lists

Written 21/01/11:
Has anyone been listening this week to Andrew outlining his reform plans on R4 PM? Tonight, though most of his time was given over to answering questions from callers, he and Eddie Mair ran out of time.  But there's good news! Andrew has promised to answer every question that is sent to him. Hmm... anyone thinking of dropping him a line?

Thanks to Steve Regan and www.armoredpenguin.com for the initial puzzle frame - great website!
Posted by Bern O'Donoghue at 12:29 1 comment: 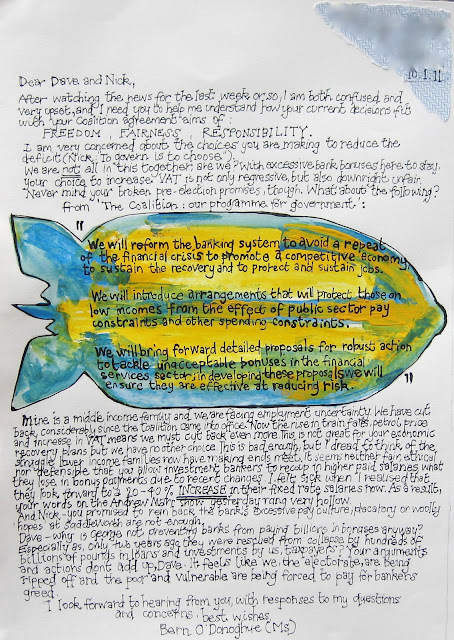 I have to admit that my anger nearly got the better of me when making letter 8; I also had to have a bit of a rant as I watched Dave not directly answer many questions  posed by Andrew Marr on his Sunday show.  That's probably because I want my politicians to be trustworthy and reliable; after all it's a big ask, that we entrust the country to Dave and Nick for five years.

Check out the Coalition agreement, the standard by which Dave and Nick want us to measure our current Government.  It places great emphasis on three words: freedom, fairness and responsibility.  At the moment they all seem to relate to money or the lack of it.  You might find it interesting that in 2009, while in opposition and talking about RBS (and other banks that you and I own), Dave was so incensed by the size of banker's bonuses, he proposed they should be limited to £2000.  Playing to the gallery possibly?  Whatever he was doing, I trust his word even less today after seeing this.
Now they have failed to keep their promise on bonuses it's tempting to simply feel frustrated at the Coalition's ineffectiveness and rhetoric.  But, as Left Foot Forward posts today, there are other options.  Wouldn't it be interesting if we all wrote to our MPs and encouraged them to push Dave and Nick to put those ideas into action?

Posted by Bern O'Donoghue at 11:58 No comments: