Letter 54: Which would you prefer Dave cut: A4E dividends or public sector services? 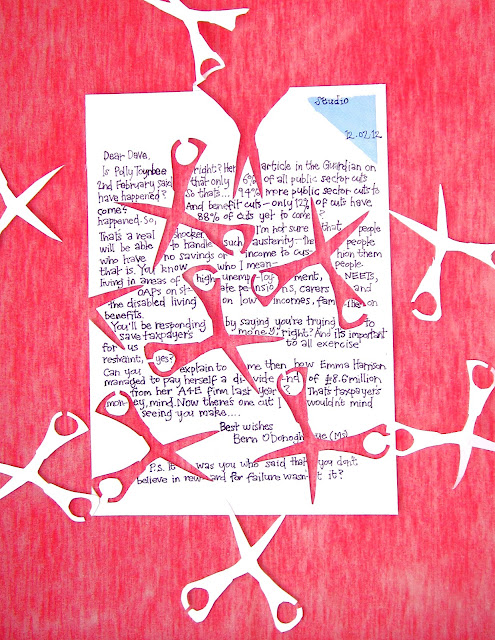 "Dear Dave
Is Polly Toynbee right? Her article in the Guardian on 2nd February said that only 6% of all public sector cuts have happened? So that's... 94% more public sector cuts to come? And benefit cuts- only 12% of cuts have happened. So, 88% of cuts yet to come?
That's a real shocker. I'm not sure that people will be able to handle such austerity - the people who have no savings or income  to cushion them that is. You know who I mean - people living in areas of high unemployment, NEETS OAPs on state pensions, carers and the disabled living on low incomes, families on benefits.
You'll be responding by saying you're trying to save taxpayer's money, right? And it's important for us all to exercise restraint, yes?
Can you explain to me then how Emma Harrison managed to pay herself a dividend  of £8.6 million from her A4E firm last year? That's taxpayer's money, mind. Now there's one cut I wouldn't mind seeing you make...


P.S. It was you who said that you don't believe in reward for failure wasn't it?"
Posted by Bern O'Donoghue at 13:53 1 comment: Links to this post

Letter 53: You don't have to be in Opposition to oppose the NHS Reform Bill 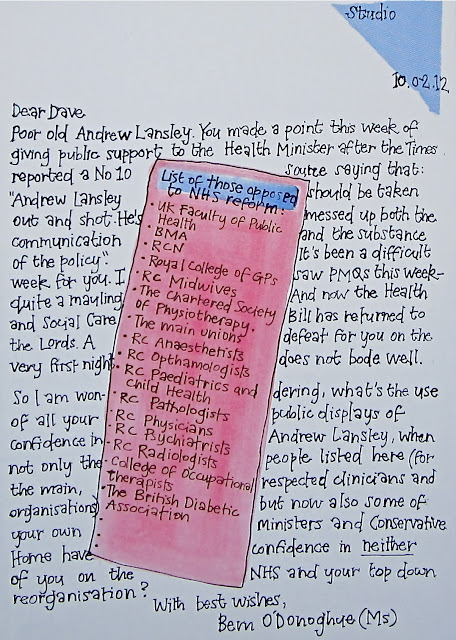 Posted by Bern O'Donoghue at 14:16 No comments: Links to this post

It's my belief that a picture paints a thousand words.... 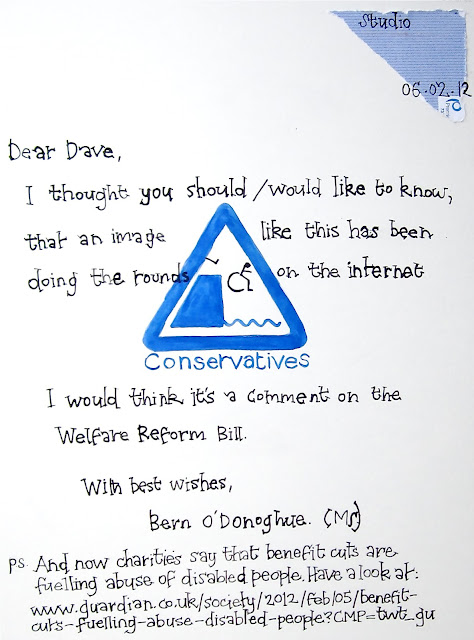 Check out the article in the mentioned in the letter. As a measure of state of our society it's disgraceful to see how people living with disability are being treated in the UK right now.

(Many thanks to Duncan Hothersall  - though not his image, he was able to tell me that permission was granted to use the logo.)

Posted by Bern O'Donoghue at 13:16 No comments: Links to this post

Letter 51: The scapegoating of Fred Goodwin and compassionate conservatism.

The Tories really earned their "Nasty Party" nickname this week. Firstly it would seem they're neither loyal nor fair when the chips are down. I expect Stephen Hester and Fred Goodwin will have been swapping notes over the last few days. It must be galling for Dave that Ed Milliband keeps banging on about a scalp and a bonus not being enough to make public anger subside.
The true face of compassionate conservatism was seen on Wednesday evening with the government's use of rare parliamentary procedure allowing them not only to overturn the Lords amendments to the Welfare reform Bill, but also preventing further challenges from Peers. It must be sickening for the Liberal Democrat party members that Tories were supported by their own MPs in the picking on the sick, poor and vulnerable. Hope Nick knows what he's doing... 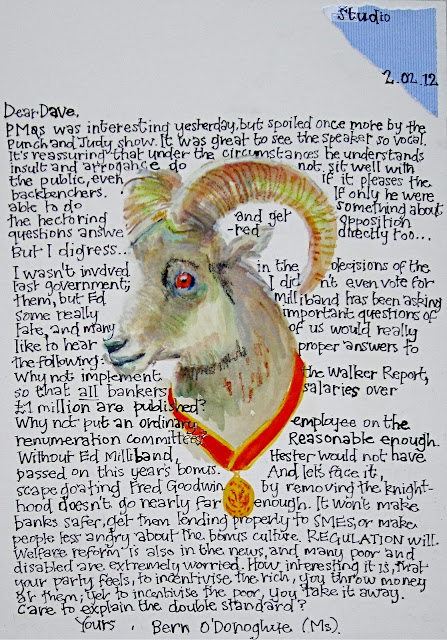 "Dear Dave,
PMQs was interesting today but spoiled once more by the Punch and Judy show. it was great to see the Speaker so vocal. It's reassuring that under the circumstances he understands insult and arrogance do not sit well with the public,even if  it pleases the backbenchers. If only he were abele to do something about the hectoring and get opposition questions answered directly too...
But I digress...
I wasn't involved in the decisions of the last government. I didn't even vote for them, but Ed Milliband has been asking some really important questions of late and many of us would really like to hear proper answers to the following:
Why not implement the Walker Report so that all bankers salaries over £1 million  are published?
Why not put an ordinary employee on the re-numeration committees? Reasonable enough.
Without Ed Milliband, Hester would not have passed on this year's bonus. And let's face it, scapegoating Fred Goodwin by removing the knighthood doesn't go nearly far enough. It won't make banks safer, get them lending to SMEs, or make people less angry about the bonus culture. REGULATION will.
Welfare reform is also in the news and many poor and disabled people are extremely worried. How interesting it is, that your party feels, to incentivise the rich, you throw money at them; yet to incentivise the poor, you take it away. Care to explain the double standard?
Yours,etc"
Posted by Bern O'Donoghue at 17:02 No comments: Links to this post