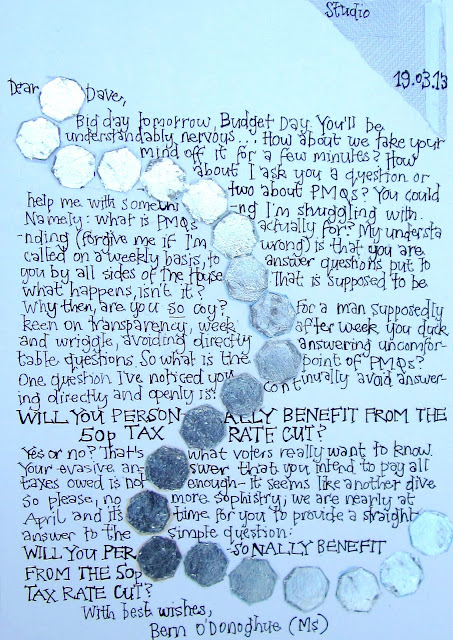 "Dear Dave,
Big day tomorrow, Budget Day. You'll be understandably nervous... How about we take your mind off it for a few minutes? How about I ask you a question or two about PMQs? You could you help me with something I am struggling with. Namely: what is PMQs actually for? My understanding (forgive me if I'm wrong) is that you are called on a weekly basis, to answer questions put to you by all sides of the House. That is supposed to be what happens, isn't it?
Why then are you so coy? For a man supposedly keen on transparency, week after week you duck and wriggle, avoiding directly answering uncomfortable questions. So what is the point of PMQs? One question I've noticed you continually avoid answering directly and openly is:

Best wishes, etc"
Posted by Bern O'Donoghue at 18:02 No comments: Links to this post 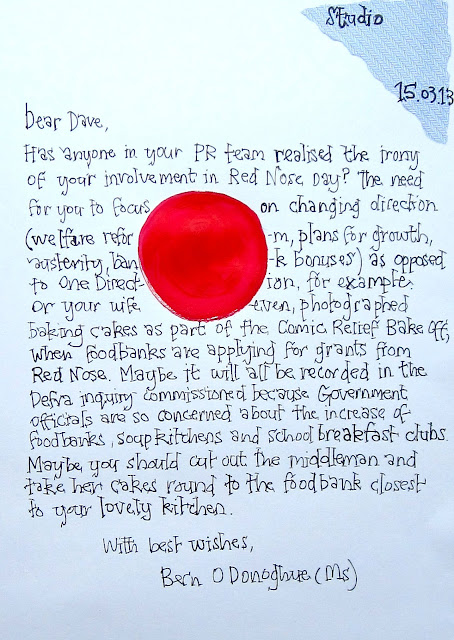 "Dear Dave,
Has anyone in your PR team realised yet the irony of your involvement in Red Nose Day? The need for you to focus on changing direction (welfare reform, plans for growth, austerity, bank bonuses) as opposed to One Direction, for example? Or your wife even, photographed baking cakes as part of the Comic Relief Bake Off, when food banks are applying for grants from Red Nose. Maybe it will all be recorded in the Defra inquiry commissioned  because Government officials are so concerned about the increase of food banks, soup kitchens and school breakfast clubs.
Maybe you should cut out the middleman and take her cakes round to the food bank closest to your lovely kitchen.

With best wishes, etc"
Posted by Bern O'Donoghue at 14:10 No comments: Links to this post

@Loftspace and I both had our children at or with the support of Lewisham Hospital, so it was with great appreciation that I travelled up to London recently to join the march in protest against the closure of the A&E and Maternity units there. As a guest on DearDavenandNick,@Loftspace has now written to Dave to tell him how she feels about Coalition plans for her family's hospital: 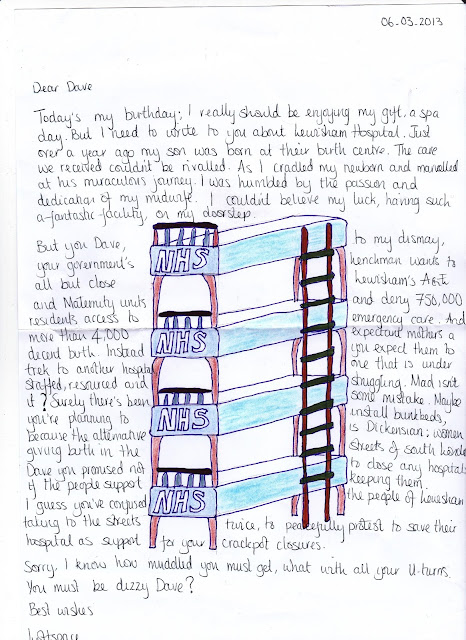 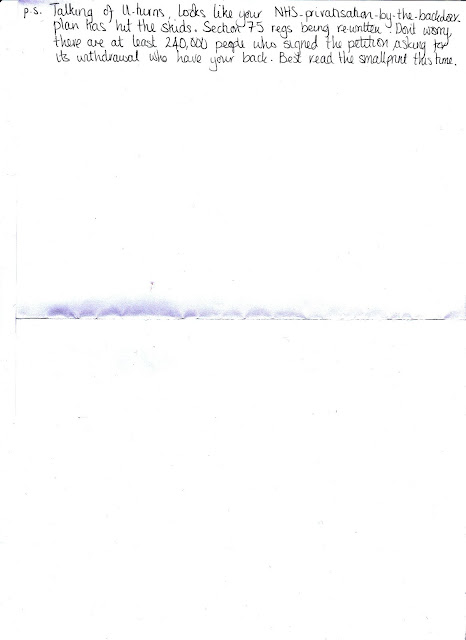 "Dear Dave
Today's my birthday; I really should be enjoying my gift, a spa day. But I need to write to you about Lewisham Hospital. Just over a year ago my son was born at their birth centre. The care we received couldn't be rivalled. As I cradled my newborn and marvelled at his miraculous journey I was humbled by the passion and dedication of my midwife. I couldn't believe my luck, having such a fantastic facility on my doorstep.
But you Dave, to my dismay, your Governments henchman wants to all but close Lewisham's A&E and Maternity units and deny 750,000 residents access to emergency care. And more than 4,000 expectant mothers a decent birth. Instead you expect them to trek to another hospital, one that is understaffed, resourced and struggling. Mad, isn't it? Surely there's been some mistake. Maybe you're planning to install bunk beds, because the alternative is Dickensian: women giving birth in the streets of South London.
Dave you promised not to close any hospitals if the people support keeping them. I guess you've confused the people of Lewisham taking to the streets twice, to peacefully protest to save their hospital as support for your crackpot closures.
Sorry, I know how muddled you must get, what with all your U-turns. You must be dizzy Dave?

p.s. Talking of U-turns, looks like your NHS-privatisation-by-the-back-door plan has hit the skids. Section 75 regs being rewritten. Don't worry, there are at least 240,000 people who signed the petition asking  for its withdrawal who have your back. Best read the small print this time."
Posted by Bern O'Donoghue at 19:46 No comments: Links to this post

Letter 98: Jakey writes to Dave about the NHS, mediocrity and competition

As I said in my last letter to Dave, I'll be laid up for a while following an operation. I've been told to take it easy if I want to make a speedy recovery, so I've enlisted the help of a few respected people to stop Dave connect with what the electorate, rather than than think tanks and the Cabinet think. Here's the first letter sent to him :

"A word-processing programme;
99%town,
Edge of the Big Society.

I know Bern O'Donoghue wrote to you last week to tell you that she was just going into hospital and that “some friends” would be taking over the letters for while. I'm one of those friends

Like Bern, I've recently been in a NHS hospital. I had an accident and was quite badly injured. I was looked after really well and met with nothing but real care and compassion. Despite all the horrible things we've been hearing about Mid-Staffs and despite all your government's efforts to force 'compulsive competitive markets' on the NHS, I really believe that pretty well all its staff  want to care for their patients and respect their dignity. They didn't go into clinical care to make a lot of money, to skive, shirk or give poor value. The people who looked after me were working really hard with unfailing good grace.  They don't do this be part of a market making profits for other people either. (And by the way, quite a lot of those standing to profit seem to sit behind or alongside you on the green benches.)

And now we've got Jeremy Hunt, your Health Secretary, attacking “mediocre hospitals” who “cruise along” rather than “striving for world class levels of excellence”. Don't you think that there might be something a little shaky about those levels being set by politicians?

Despite your promise of no more “top-down re-organisation”, the Coalition has plugged into the same stream of targets, directives and commercial re-orientation as previous governments. You've also reduced nurse numbers by 5000. Isn't is likely that all this combines to distract and divert front line staff from their core functions?

So I hope you'll find time to reflect on the recommendation from Robert Francis' report that  there should be “a common patient centred culture which produces at the very least the fundamental standards of care to which we are all entitled, at the same time as celebrating and supporting the provision of excellence in healthcare.” Enabling those basics seems to make a good deal more sense than pushing hyperbole about trying to be the best at everything.

Posted by Bern O'Donoghue at 12:11 No comments: Links to this post