Letter No 6 (below) will have reached Dave, Nick and George the day before the marvelous UKuncut stages it's huge tax dodge protest up and down the UK's high streets. Anyone annoyed about the disruption tomorrow might like to remember that if HM Revenue and Customs recovered the money that the Arcadia group (Topshop, Topman, Miss Selfridge, BHS, Wallis, Burton, Dorothy Perkins, Evans) gains through tax avoidance, the coalition could choose to pay the salaries of 20,000 NHS nurses, or the £9,000 fees of nearly 32,000  students. 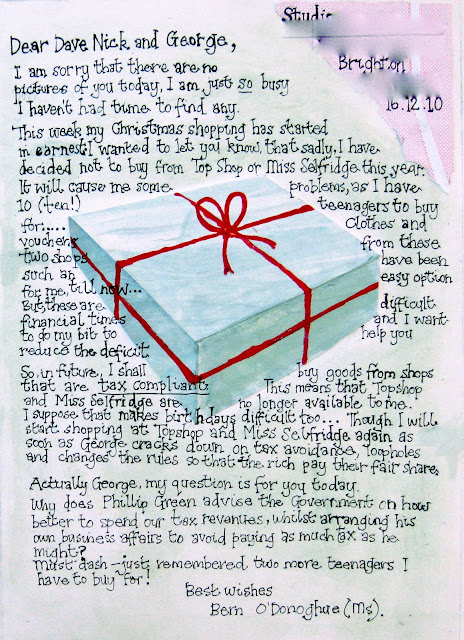 I've recently discovered the tax expert Richard Murphy. His blog is really worth checking out as he writes in a way that's both informative and interesting. He got me thinking when he wrote on December 13th:  "First, just because something is legal does not mean it's ethical. Think apartheid in South Africa or even slavery in 18th century England and move on from there. Second, remember that when you avoid something you go round it. That's what tax avoiders do. They go round the law. How on earth can anyone, anywhere claim that getting round the law is ethical?"
He is spot on.  So before starting my Christmas shopping, I felt that it was important not only to protest and boycott, but also to let George, Nick and Dave know about it. What choices would the Coalition consider making if we all shopped only with businesses that don't use tax loopholes - and informed George?
Posted by Bern O'Donoghue at 12:18