Letter No 4: Tuition Fees: The Reason People are Marching

Letter No 4 should have reached Dave and Nick this morning.  After a bruising time for all on Thursday, I would think many of us wish to send our best wishes to all who were hurt in Parliament Square and hope in particular that Alfie Meadows makes a speedy and complete recovery.  It's saddening that once more the violent actions of the few distract from well behaved protest of the peaceful majority.  These letters in the Guardian bear witness to how unfairly they seem to be continually lumped together.  So for anyone who has forgotten, the reason people are marching and will continue to protest is because the damage the Government is proposing to do to the education system.  An 80% cut in teaching grants and the massive hike in fees that will be implemented to pay for it will make Further Education unwelcoming and unaffordable for poorer and middle income families.  This would be unnecessary if the Government dealt properly with regulation of the banks and tax avoidance. 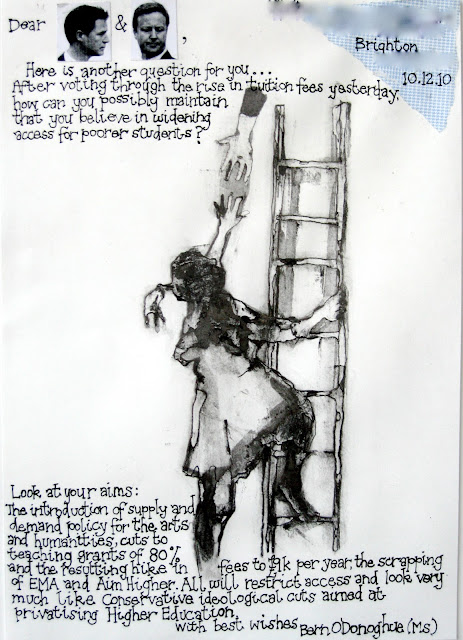 Many people have pointed out repeatedly that the coalition changes to Further Education will be implemented without mandate. The changes are deeply unpopular because people suspect that they are based not on economics, but on Conservative ideology. The real reason that the Coalition has been unable to sell it's Further Education changes to the public is simple; we know sophistry when we see it and are not fooled.  What the Government should be doing is consulting properly on the changes - where's the Green Paper, Dave?

One final comment....I'd like to say thank you to the 21 Lib Dem rebels who were as good as their word in voting against the hike in tuition fees and those Conservatives who voted against because they too understood how debt averse students will be discouraged.   In particular, I was impressed by Greg Mulholland's heartfelt contribution to the Commons debate before the vote.  There is someone who can look his constituents in the eye, Nick.
Posted by Bern O'Donoghue at 23:13