Letter 60 PM:"a bit of petrol panic may be no bad thing"

I have painted on many strange surfaces before, but never needed to paint on coal before...
I 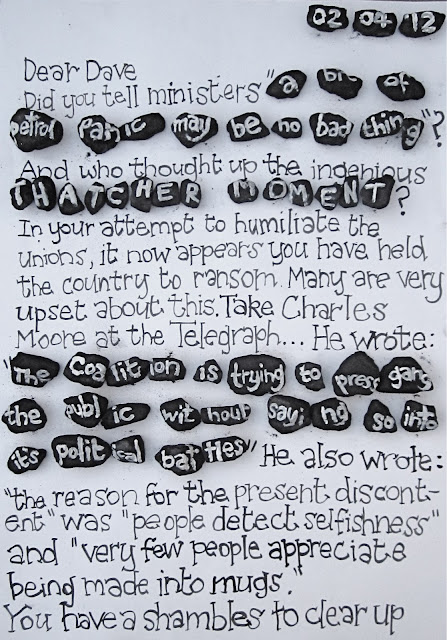 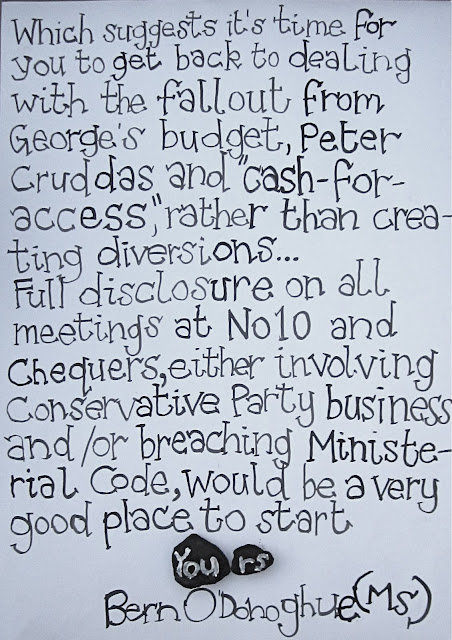 "Dear Dave,
Did you tell ministers" a bit of  petrol panic may be no bad thing"? And who thought up the ingenious THATCHER MOMENT? In your attempt to humiliate the unions it appears you have now held the country to ransom. Many are very upset about this. Take Charles Moore at the Telegraph... He wrote:
"The Coalition is trying to pressgang the public without saying so into it's political battles." He also wrote: the reason for the current discontent" was" people detect selfishness" and "very few people appreciate being made into mugs."
You have a shambles to clear up.
Which suggests it's time  for you to get back to  dealing with the fallout  from george's budget, Peter Cruddas  and "cash-for-access, rather than creating diversions...
Full disclosure on all meetings at No 10 and Chequers either involving Conservative Party business and/ or breaching Ministerial Code would be a very good place to start
Yours..."
Posted by Bern O'Donoghue at 20:24