Letter 57: Allowing private healthcare groups to be "tax efficient" will rob the NHS of much needed funds

So the Health and Social Care Bill passed through the Lords and will be on law by Easter. A weird little ritual took place at Downing St in celebration of it's passage, making those present appear less than honourable. Still, let's see how it's implemented and the effect that will have at the hustings... 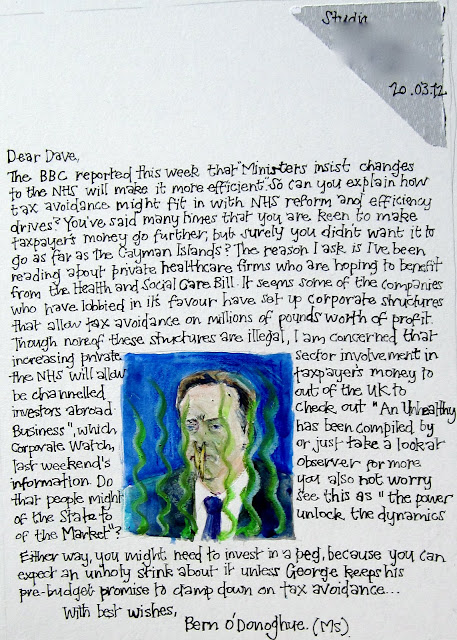 "Dear Dave,
The BBC reported this week that "Ministers insist changes to the NHS will make it more efficient."So can you explain how tax avoidance might fit in with NHS reform and efficiency drives? You've said many times that you are keen to make taxpayers money go further, but surely you didn't want it to go as far as the Cayman Islands? The reason I ask is I've been reading about private healthcare firms who are hoping to benefit from the Health and Social Care Bill. It seems some of the companies who have lobbied in it's favour have set up corporate structures that allow tax avoidance on millions of pounds worth of profit. Though none of these structures are illegal, I am concerned that increasing private sector involvement in the NHS will allow taxpayer's money to be channelled out of the UK to investors abroad. Check out "An Unhealthy Business" which has been compiled by corporate Watch, or just take a look at last weekend's Observer for more information. Do you not also worry that people might see this as "the power of the State to unlock the dynamics of the Market"?
Either way, you might need to invest in a peg, because you can expect an unholy stink about it unless George keeps his pre-budget promise to clamp down on tax avoidance...
With best wishes, "
Posted by Bern O'Donoghue at 12:31