Post Autumn Statement, the papers provide grim reading. The Coalition's austerity measures seem to have secured us the position of having the highest national debt of any of the AAA nations, apart that is from the USA. Thanks lads, not quite what you promised us 18 months ago. No wonder George pre leaked what little good news there was before he faced the House. It was said on the BBC that rarely has a budget been so prematurely or intentionally leaked - as if our Chancellor was trying to sweeten the bitter pill that was to come: 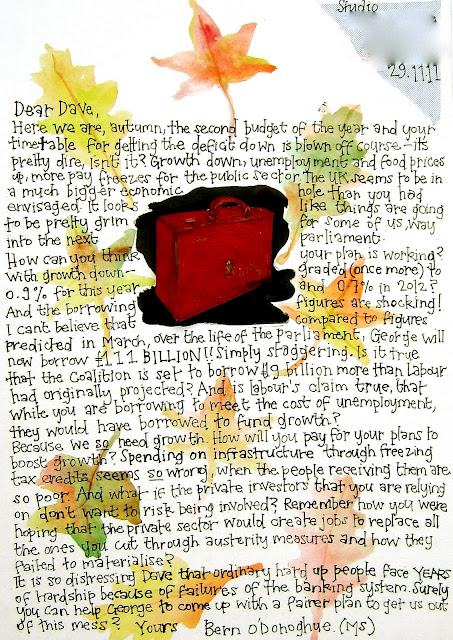 Wouldn't you agree it's time for the Coalition to find the real solution to our economic woes within the banking sector and tax loopholes?

P.S.
As requested, here is the contents of the letter for those who are finding it difficult to read the writing:
Dear Dave,
Here we are, autumn, the second budget of the year and your timetable for getting the deficit down is blown off course - it's pretty dire, isn't it? Growth down, unemployment and food prices up, more pay freezes for the public sector. The UK seems to be in a much bigger economic hole than you had envisaged. It looks like things are going to be pretty grim for some of us, way into the next parliament.
How can you think your plan is working? With growth downgraded (once more) to 0.9% for this year and 0.7% in 2012? And the borrowing figures are shocking! I can't believe that compared to figures predicted in March, over the life of the parliament, George will now borrow £111 billion!! Simply staggering. Is it true that the Coalition is set to borrow £19 billion more than Labour had originally projected? And is Labour's claim true, that while you are borrowing to meet the cost of unemployment, they would have borrowed to fund growth?
Because we so need growth. How will you pay for your plans to boost growth? Spending on infrastructure through freezing tax credits seems so wrong, when the people receiving them are so poor. And what if the private investors that you are relying on don't want to risk being involved? Remember how you were hoping that the private sector would create jobs to replace all the ones you cut through austerity measures and how they failed to materialise?
It is so distressing Dave that ordinary hard up people face YEARS of hardship because of failures of the banking system. Surely you can help George to come up with a fairer plan to get us out of this mess?
Yours, etc
Posted by Bern O'Donoghue at 01:03

Could you please type out the text of the letter for those who find handwriting difficult to read? Many thanks.

Dear fearlessknits, shall do and thanks for the request.