Letter 102: Welfare reform will brew a perfect storm of misery 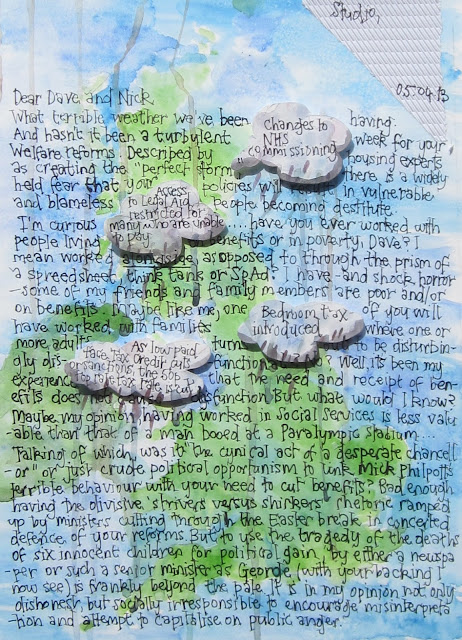 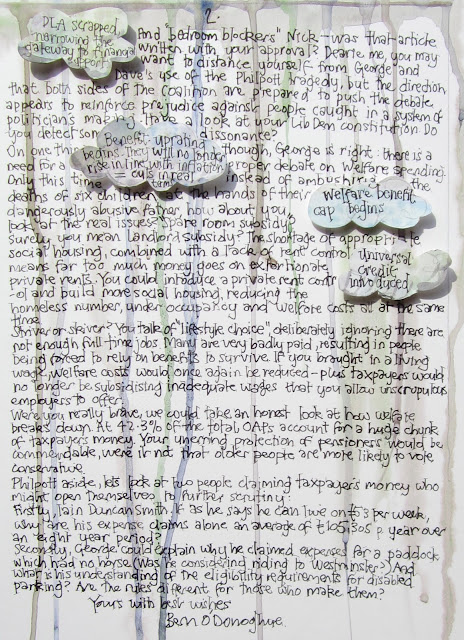 "Dear Dave and Nick,
What terrible weather we've been having. And hasn't it been a turbulent week for your welfare reforms? Described by housing experts as creating"the perfect storm", there is a widely held fear that your policies will result in vulnerable and blameless people becoming destitute.

I'm curious...have you ever worked with people living on benefits or in poverty, Dave? I mean worked alongside, as opposed to through the prism of a spread sheet, think tank or SpAd? I have - and shock horror - some of my friends and family members are poor and/or on benefits.
Maybe like me, one of you will have worked with families where one or more adults turns out to be disturbingly dysfunctional? No? Well, it's been my experience that the need and receipt of benefits does not cause dysfunction. But, what would I know? Maybe my opinion, having worked in Social Services, is less valuable than that of the man booed by 80,000 people in a Paralympic stadium...

Talking of which, was it "the cynical act of a desperate chancellor" or just crude political opportunism that to link Mick Philpott's terrible behaviour with your need to cut benefits? Bad enough having the strivers v shirkers rhetoric being ramped up by ministers cutting through the Easter break in concerted defence your reforms; but to use the tragedy of the deaths of six innocent children for political gain, by either a newspaper or such a senior Minister as George (with your backing I now see) is frankly beyond the pale. It is in my opinion not only dishonest, but socially irresponsible to encourage misinterpretation and attempt to capitalise on public anger.

2
And "bedroom blockers" Nick  - was that article written with your approval? Dearie me, you may want to distance yourself from the distasteful use of the Philpott tragedy, but the direction that both sides of Coalition are willing to take the debate, appears to reinforce prejudice against people caught in a system of politician's making. Have a look at your LibDem constitution. Do you detect some dissonance?

On one thing though, George is right: there is a need for a proper debate on Welfare spending. Only this time instead of ambushing the deaths of six kids at the hands of their dangerously abusive father, how about you look at the real issues? Spare room subsidy? Surely you mean landlord subsidy? The shortage of appropriate social housing, combined with lack of rent control, means far too much money goes on extortionate private rents. You could introduce a private rent control, build more social housing, reducing the homeless number, under occupancy and Welfare costs all at the same time.

Striver or skiver? You talk of "lifestyle choice" deliberately ignoring there are not enough full time jobs. Many are very badly paid, resulting in people being forced to rely on benefits to survive. If you brought in a living wage, Welfare costs would again be reduced - plus taxpayers would no longer subsidising the inadequate wages that you allow unscrupulous employers to offer.

Were you really brave, we could take an honest look at how Welfare breaks down. At 42.3% of the total, OAPs count for a huge chunk of taxpayer's money. Your unerring protection of pensioners would be commendable were it not that older people are more likely to vote Conservative.

Philpott aside, let's look at two people claiming taxpayer's money who might open themselves to further scrutiny:
Firstly Iain Duncan Smith. If as he says, he can live on £53 per week, why then are his expense claims  alone an average of £105,305 per yr over an eight year period?

Secondly, George could explain why he claimed expenses for a paddock which had no horse. Was he considering riding to Westminster? And what is his understanding of the eligibility requirements for disabled parking? Are the rules different for those who make them?

That was all good until I read the "pensioners more likely to vote Tory" bit. Well, as former member of the SWRP and a life long left Socialist don't count me in that number - and I'll fight to keep the shitty state pension I paid for over many years via taxes and NI. To be honest, this is going nowhere until there's a new party. Ken Loach has the right idea - can't wait for my pre-ordered copy of "Spirit of 45".