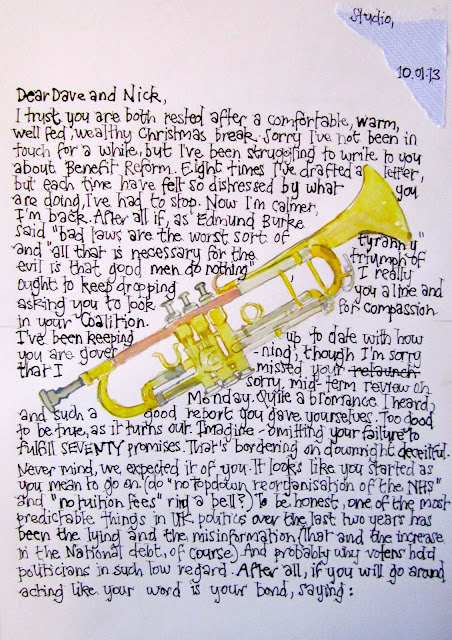 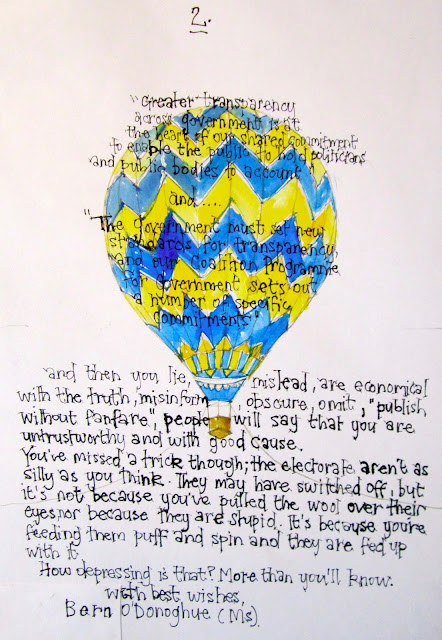 "Hi Dave and Nick,
I trust you are both rested after a comfortable, warm, well fed wealthy Christmas season. Sorry I've not been in touch for a while, I've been struggling to write to you about Benefit Reform. Eight times I drafted a letter, but each time have felt so distressed by what you are doing, I had to stop. Now I'm calmer, I'm back. After all if, as Edmund Burke said  "bad laws are the worst sort of tyranny" and "all that is necessary for the triumph of evil is that good men do nothing", I ought to keep dropping you a line and keep looking for the compassion in your Coalition.

I've been keeping up to date with how you've been governing, though I'm sorry I missed the relaunch, sorry mid term review, on Monday. Quite a bromance, I heard and such a good report you gave yourselves. Too good to be true as it turns out. Imagine - omitting your failure to fulfil SEVENTY promises. That's bordering on downright deceitful.

Never mind, we expected it of you. It looks like you started as you mean to go on ( do "no topdown reorganisation of the NHS" and " no tuition fees" ring a bell?) To be honest, one of the most predictable things in UK politics over the past two years has been the lying and the misinformation. (That and the increase in the National Debt of course.) And probably why voters hold politicians in such low regard. After all, if you will go around acting like your word is your bond, saying:

2.
"Greater transparency across Government is at the heart of our shared commitment to enable the public to hold politicians and public bodies to account" and "The Government must set new standards for transparency, and our Coalition Programme for Government sets out a number of specific commitments"

and then you lie, mislead, are economical with the truth, misinform, obscure, omit, "publish without fanfare", people will say that you are untrustworthy and with good cause.

You've missed a trick though; the electorate aren't as silly as you think. They may have switched off, but it's not because you've pulled the wool over their eyes, nor because they are stupid. It's because you're feeding them puff and spin and they are fed up with it.

How depressing is that? More than you'll know.