A reply from The Rt. Hon. Charles Kennedy, M.P.

Mid November I contacted a few Lib Dem MPs, expressing my concerns and asking them to honour their pre election pledge.  I want to share this reply I received from Charles Kennedy. 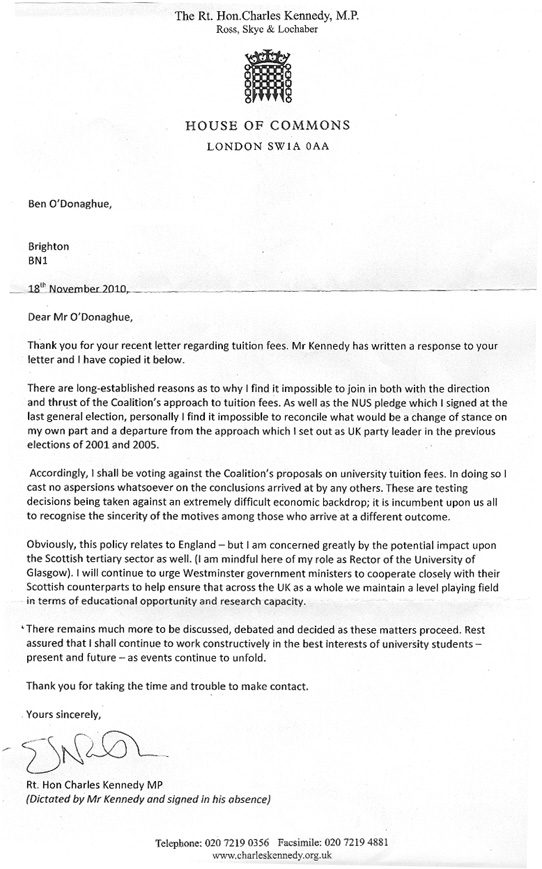 I was really heartened to get this reply - maybe more will keep their word?  Yesterday I attended the student protest in Brighton (and also marched in London on 10th November).  Obviously the majority of protesters were students and lecturers, but there were also a considerable number of angry, concerned parents - even some grandparents and people who had no children themselves but felt the changes to HE are wrong in principle and bad for everyone.  Each time people explained why they were there, the same issues came up; fairness, accessibility for poorer students, being debt averse, the promise made by all 57 Lib Dem MPs and their focussed pursuit of student votes during the election campaign.  Many like me are still incredulous that Nick Clegg had decided before the election that he would break his promise, yet continued to campaign on the strength of fairness and transparency.  What was it he said again? "There should be no more broken promises..."
So, on the strength of feeling at yesterday's protests (continuing I see with overnight sit-ins in at least three universities), I shall send a few more MPs a nudge today - anyone else up for a bit of letter writing?